9.My debts to Annie [2] include unconditional love, how to rule a hippie cabin with maternal good humour, an example of "stay-at-home" mother, the willingness to belt out Big Spender mixed in with camp songs while walking down dusty country roads or go canoeing in the middle of the “work” day, an intuitive interest in probing for gossip to generate laughter, and amazing patience with an exacting husband and all the chipmunks that damaged laundry on the clothesline. Her openness towards the kooky people who lived on the same lake as she did drew them to her, and meant she often had to set extra plates at the table, or help look for lost false teeth in the bottoms of swimming pools. Her manner, of determining and systematizing the essential rules of life was inscrutable and unmethodical. Only displaying signs of anger at her sons when they were beating on one another, she was at once an able volunteer to play piano at the town's church and yet full of questions to discuss and sometimes shock me. Her approval was always ecstatically expressed, yet she didn’t like to show off her knowledge, unless it was about plants, wild animals, insects, children or cooking. 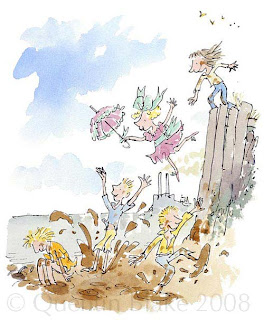 M is for Mud by Quentin Blake

10. It was my teacher, Mrs. Lafayette, who made me aware of the possibility of my being a little nit-picker in elementary school. Other kids (especially those from the “Coloured Apartments”[3]) should not be sharply corrected for saying that they “opened” the lights. Some were from Beirut and were said to have seen dead bodies in the streets. 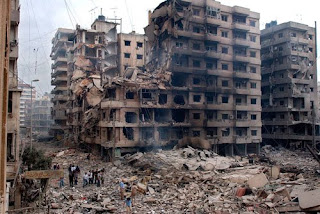 It is better people to say “turned on” the lights by tactfully using the expression oneself, in say, a reply to a question in class. She sometimes sharply corrected us for saying razz-berries instead of "rasP-berries," or Wenz-day instead of "WED-NEZ-day," though I've rarely heard her pronunciation used elsewhere.

[2] (1955-) Really a second mother... not duty-corroded, who set an example of deliberately sticking to house-wifery in spite of having been through women's lib.

[3]) Publicly-funded apartment complex called "coloured" because each stuccoed building was painted yellow, green, blue or burgundy. No-man’s land as a child. [interesting sidenote: a notorious rapist lived in these apartments in the 1970s/80s, therefore my mother's intuition was sound. Go mum!
Posted by Rubber Gloved Philosopher at 1:47 PM